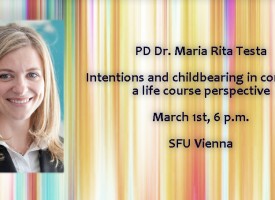 We cordially invite you to the guest lecture:
PD Dr. Maria Rita Testa:
Intentions and childbearing in contexts: a life course perspective

(PTW-students: Attending this lecture counts with 2 units for Window of Opportunity)

CONTENT:
The adult life of women and men is characterized by a plurality of choices and events pertaining to different life domains, but in the literature pregnancy intentions are normally studied in isolation from intentions pertaining to other spheres of life. We study the correspondence of pregnancy intentions and reproductive outcome in a life course framework, encompassing several life domains such as partnership, education, work and residence. Using longitudinal data from the Generations and Gender Surveys in five European countries (Austria, Bulgaria, France, Hungary, and Lithuania), we examine individuals’ pregnancy intentions and subsequent outcomes with a focus on the mediating and moderating role of alternative life course intentions. We find that adults’ life plans are multidimensional and that the more simultaneous intentions individuals have, the less likely they are to achieve their childbearing goals in a short-term period. Some intentions, like moving to a new dwelling, facilitate the realization of birth intentions; others, like changing a job, tend to hinder the realization of birth intentions. Finally, individuals are more successful in having their intended child in countries that promote a reconciliation of work and family life.