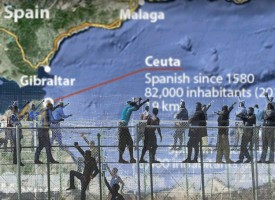 THE FACULTY OF PSYCHOLOGY SIGMUND FREUD UNIVERSITY INVITES TO THE LECTURE:

The lecture aims to describe the personal identities that emerge from border people who live at Spanish-Moroccan border, between the cities of Ceuta and Tétouan. This work goals to understand border people experience and their identity construction at the same time it tries to related with the border scenario where they take place.

Border is not anymore perceived as formal state frontiers or concrete areas, but a broaden conception that includes everyday border-making process. That makes conceive borders as institutions, processes and symbols (Kolossov & Scott, 2013), and reflect the human understanding and praxis on the bordering process (Brambilla, 2015).

From a cultural psychology point of view, border is understood as an artefact (Vasiner, 2014), which organizes the relationship with the environment at the same time that provides a structure for our mind and for our ways of behaving, feeling and thinking (Marsico, 2016). By participating and interacting with others at the border setting, people internalise values and practices that dynamically build their minds (Wertsch, 1985). People assume other’s significant discourses and reflect them in their personal narratives as different voices (Wertsch, 1991).

Furthermore, identity is understood as a dynamic interplay between the individual and the social and cultural environment. By constructing a self-making narrative (Bruner, 1997, 2003), people localise themselves in different places (I-positions) from they narrate who they are (Hermans, 2001) and who are the others significant. Equally, significant other’s voices (Bakhtin, 1984) are dialogically intertwined into the personal story, shaping their self-making narratives.

The analysis of autobiographic interviews carried out at the Spanish-Moroccan border shows how different social discourses from the border zone are held and knit a diversity of identities where the border itself and the diversity of agents have an important influence in this. Here, elements like power, social group perceptions, national or post-colonialism discourses, as well as family ties exercise important influences in the personal positioning of border people. In addition, it provides some guidelines to understand some aspects of the bordering process and its impact in the personal meaning-making.

Alicia Español is PhD Student in Psychology and assistant professor at the University of Seville (Spain). Her research project is focused on describing border identities around the Spanish-Moroccan international border from a cultural psychology point of view. She is interested in how the different relationships kept with the border create a diversity of meaning and perceptions by the border people around it, mainly in the identity construction process and its interdependency with the creation of the otherness. She is carrying out her research thanks to a grant of Programa de Formación del Profesorado Universitario – FPU (University Teacher Training Program) of the Ministry of Education, Culture and Sports from the Spanish government. Among other research interests, she is interested in the use and improvement of qualitative research methods, international migrations process and de-colonial perspectives.