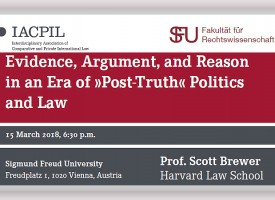 JUS | Invitation Lecture by Scott Brewer on Evidence, Arguments, and Reason in an Era of “Post-Truth” Politics and Law

Evidence, Arguments, and Reason in an Era of “Post-Truth” Politics and Law

Professor Scott Brewer (Harvard Law School) will present a lecture on the topic of the relation between evidence and reason in a world of “post truth” politics and law.  The Interdisciplinary Association of Comparative and Private International Law in cooperation with the Faculty of Law at Sigmund Freud University are hosting this evening lecture by Professor Scott Brewer. Prof. Christoph Bezemek (University of Graz) will provide comments and lead into a discussion.

The Enlightenment project sought to place reason at the center of understanding both the world and the human being.  On this view, evidence was an essential tool of reasoned understanding – evidence from the world, from the study of humans’ political and social existence, and from introspection of the human mind itself.  But this faith in reason and reasoned evidence became, and remains, deeply shaken.  In part, this shaken faith was enabled by the work of three great Doubters: Nietzsche (who taught that we should be suspicious of our religious, moral, and political beliefs and actions), Freud (who – as an inheritor of, if not a direct student of, Nietzsche – taught that we should doubt our psychological motives), and Marx (who taught that we should doubt our economic and political motives).