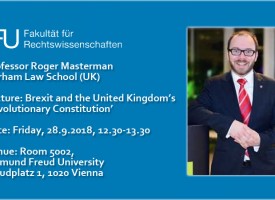 The narrow 2016 UK-wide vote in favour of exiting the European Union (EU) masked differentiated preferences evidenced in the UK’s constituent territories. While majorities in England (53.3% voting to leave) and Wales (52.5%) expressed a desire to leave the EU, the largest proportion of votes cast in Scotland (62.0% voting to remain) and Northern Ireland (55.8%) were in favour of the UK’s continued membership of the Union. At one level of analysis, that the decision to leave should be supported by a majority vote across the entire UK is consistent with the status of the UK as the contracting party to the EU treaties, and with the fact that the importation of EU laws into the UK’s legal systems is primarily a matter resting upon UK-wide legislation. From an alternative perspective however, the referendum obscures the fact that, since 1999, devolution has diluted the unitary narrative of the UK constitution through the introduction of structures of sub-national government that have reinforced distinctive claims to self-government in the devolved territories. The Brexit vote however – following on quickly from the 2014 referendum on Scottish independence – contained significant potential to further deepen fissures in the devolutionary constitution, and to diminish the emergent quasi-federal nature of the post-1999 constitutional landscape.

Roger Masterman joined Durham Law School in 2002 as Senior Research Associate, and until 2005 worked on the AHRC-funded project, ‘Judicial Reasoning and the Human Rights Act 1998.’ He was appointed Lecturer in Law in 2005, was promoted to Senior Lecturer in 2008, to Reader in 2011 and to Professor in 2013. He served as Head of Durham Law School between 2013 and 2016.

He is the author of The Separation of Powers in the Contemporary Constitution: Judicial competence and independence in the United Kingdom (Cambridge University Press, 2011) and (with Ian Leigh) Making Rights Real: The Human Rights Act in its First Decade (Hart Publishing, 2008). The second edition of his textbook Constitutional and Administrative Law – written with Colin Murray of Newcastle Law School – was published in the Longman Law Series in June 2018. Law-related tweets, and short updates to the latter, can be found by following @mastermanmurray.

His current projects include a study of Multi-Level Constitutions – for inclusion in the Cambridge Companion to Comparative Constitutional Law (which he is, with Robert Schütze, also editing) and an essay on Brexit and the United Kingdom’s devolutionary constitution.