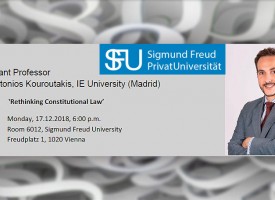 This project is based on the assumption that ‘Power’ rots political actors. This remark is not new, as Alexis de Tocqueville had already remarked that ‘intrigue and corruption are the natural defects of elective government’. So, it should not take analysts and commentators by surprise, the fact that political actors around the world constantly purport to entrench their power.

Based on that, I argue that what makes democracies an imperfect mechanism -and what makes people dissatisfied with political elites- are the following: (1) political actors who abuse their dominant position, for instance by amending the constitution to consolidate their power, (2) political actors who conspire with other political actors to advance their interests, suffice to mention here the manipulation and the redrafting of the boundaries of electoral constituencies, the so called gerrymandering, and (3) political actors who take advantage from the access to state recourses in order to strengthen forthcoming political campaigns.

All the aforementioned practices have a common outcome. They create barriers to entry to new political actors, and they preserve the political establishment. As a result, the quintessence of democracy, as it was described in Thucydides Perikleous Epitaphios, which is the election of the most competent, is corroded. I conclude with the argument that what justifies authority in democracies is the combination of fair procedures with the feeling that we are governed by the most competent.

Methodologically, the analysis will first define the concepts of ‘political actors’ and of ‘power’ and then it will categorize practices from a variety of legal orders, namely Australia, France, Greece, Singapore, South Africa, Spain, US and UK. The goal of this paper is to identify constitutional configurations and mechanisms that safeguard the constitutional system from political actors who abuse their power in order to entrench their position.

Dr. Antonios Kouroutakis is Assistant Professor at IE University in Madrid, Spain and he has taught a variety of law courses and conducted research at the City University of Hong Kong, the Free University of Berlin, FVG Sao Paolo, and Aristotle University of Thessaloniki. Kouroutakis received a DPhil in Law from University of Oxford and an LLM from UCLA School of Law. Dr. Kouroutakis’ research interests lie mainly in the field of constitutional engineering, public law and regulation. In particular, Dr. Kouroutakis is interested in the concept of separation of powers, rule of law, emergency legislation, and the regulation of new technologies; he has published widely on these topics in international and peer reviewed journals, and his work has been cited in numerous reports while his research on the constitutional value of sunset clauses was cited by the British Parliament.