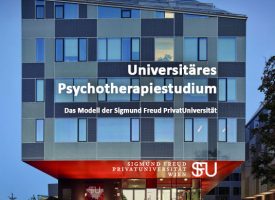 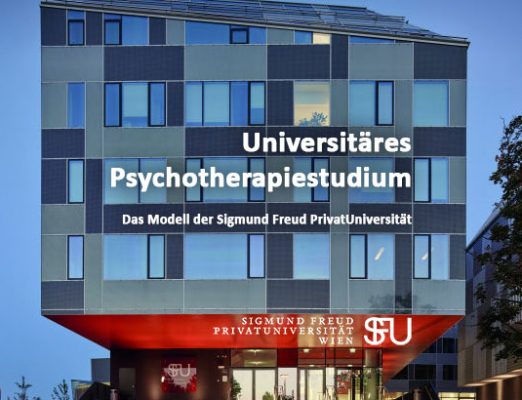 Sigmund Freud, the most important personality of psychotherapy and psychoanalysis in the 20th century, often struggled with the ignorance of the university world of the time to give psychoanalysis the importance it deserved (Freud, 1919a, p. 192ff.).

There were several reasons for founding SFU:

(a) the motive of professional law: from 1985 (Sweden) until today, 13 bodies of law have emerged in European countries regulating the practice of the psychotherapist profession. In principle, all of them provide for the profession’s autonomy, not only as postgraduate training in professions such as medicine, psychology or social work. But an undergraduate degree, such as the one now provided for in German legislation since September 2019, had not yet been formulated. In our minds, however, it already existed at the beginning of this millennium. Academisation, i.e. direct study, which means that the psychotherapeutic profession is acquired as a first identity and not via a diversion of previous professional training. Last but not least, legislation was also moving in the direction of psychology and it was important for us to establish recognition of psychotherapy as a scientific discipline on an equal footing with others through the study programme. This was also connected to the importance of both professions for a possible health insurance reimbursement for the respective services (psychotherapy on the one hand, test psychology and psychological treatment on the other). This required an academic basis for psychotherapy.

b) the theoretical motive: psychotherapy as a profession is not only determined by the praxeology of a craft, but also by the theoretical presuppositions and theoretical models of the human soul and its deviations from the norm and its pathologies. Thus, from 2005 onwards, the new university set itself the task of interweaving and expanding theory formation and psychotherapeutic practice. The theory-building was to produce generalities, but not to make the specifics of the various psychotherapy methods we wanted to teach disappear, because this is a body of knowledge that has undergone a correspondingly valuable development over the last 200 years. But it is not only about history, a university has essential tasks in the field of research, which should be carried out appropriately to the subject “The Human Soul” and pointing to the future.

c) The teaching motive: We took up the challenge of teaching psychotherapy at the university and opposing our model to those who either denied or devalued the teachability of psychotherapy. In addition to theoretical teaching, it required both practical experience, which is collected and also supervised in our psychotherapeutic outpatient clinic set up for this purpose, and so-called “training therapy”. Especially the training therapy was controversial in the beginning: the student has to undergo self-experience “alongside his or her studies”, which is supposed to lead to the student not only dealing with the “matter” but also with him- or herself and thus bringing his or her own personality into the complex psychotherapeutic process. Since very personal and intimate details are always discussed in training therapy, it was clear from the outset that the confidentiality of this relationship – as well as the therapeutic relationship later on – had to be maintained. Therefore, the training therapist only confirms the completion, but keeps the contents confidential.

This book (available in German only) brings together the scholars at SFU Vienna: each of whom has devoted him/herself to a specific topic, and thus gives an impression of the depth, but also the breadth of the subject of “psychotherapy science”. 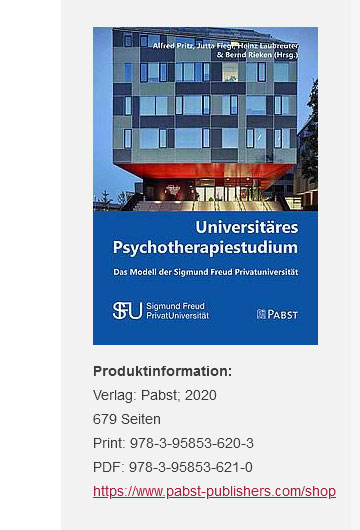