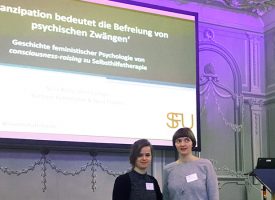 On 8th November 2019, Vera Luckgei and Barbara Rothmüller, SFU Faculty of Psychology, presented latest research results from the FWF project “The Psychological is Political”, led by Nora Ruck, at the annual conference of the Gender Studies Association Austria at the University of Innsbruck.

There was a lively discussion with other speakers and the audience on the ambivalent – and sometimes contradictory – processes of psychologizing political practices and the politicization of psychological knowledge in feminist “spaces of activism”.

Research Project | The psychological is political.
A recent history of feminist psychology in Vienna, 1972-2000

In 2016, Austria ranked 53rd in the international Global Gender Gap Report, losing 15 ranks from 2015. This development needs to be countered on many levels including science. In order to reach real gender equality in Austrian society it is indispensable that the psychological dimensions of gender inequality be addressed in at least three ways: First, the psychological reasons for women and men not to counter gender discrimination need to be studied scientifically. Second, the consequences of gender inequalities for the psychological health and wellbeing of those affected must be understood scientifically. And third, these psychological consequences need to be addressed by psychosocial services that take into account the social dimension of psychological suffering. There is no need to invent these approaches anew because in Austria – like in other places – there is a wealth of knowledge on all these three layers that need only be excavated, documented, and made available to a larger public, which is precisely what the proposed project aims to do.

“The Psychological is Political” aims to analyze how knowledge about the psychological dimensions of gender discrimination developed in Vienna between 1972 and 2000. In the early 1970s, activists of the women’s movement began examining the conditions and psychological effects of discrimination against women. Observing how inequality or discrimination caused harm, activists were soon offering specialized counseling and psychotherapy. In the course of time, this focus was broadened to include the lives and experiences of those who do not comply with heterosexuality or who do not identify as the sex they were assigned at birth.

While the history of knowledge production about the psychological conditions and consequences of gender inequality is well documented particularly in the USA, Canada and Great Britain, there is strikingly little literature on the subject in the German-speaking countries. This project is designed to fill this gap. It is our contention that knowledge about the psychological dimension of gender inequality, for example, has burgeoned in Austria especially since the late 1970s, only that for various reasons it has not been able to gain a foothold in academia.

Through archival research and oral history interviews, we will reconstruct how this knowledge was used and produced in Vienna, in feminist consciousness-raising groups (e.g., AUF Aktion Unabhängiger Frauen and at so-called ‘Volkshochschulen’), in women’s counseling and information centers (e.g., Frauen beraten Frauen, Peregrina, Lefö, Ninlil), and at the Department of Psychology at the University of Vienna from 1972 until the the year 2000. In our analysis, we will focus on the institutional and social context of psychological knowledge about the psychological conditions and consequences of gender inequality in order to get a sense of the conditions that have facilitated or hindered the development of knowledge about the psychological dimensions of gender inequality.