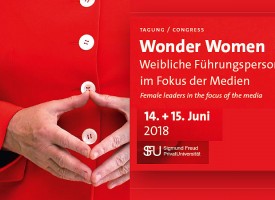 CEOs, heroines in movies or television serials—women are increasingly taking on leadership positions in real life and on screen. Is this going to create new options for all of us (including men) or will behavior patterns that were traditionally male just transgress the gender boundaries? What will be the fate of our established concepts of leadership in this respect?

We want to pose such questions in the context of a conference dedicated to “leadership, women and media” (especially film and television).

In film and television, strong women are increasingly present as central actors in leadership and heroine roles: e.g. “Wonder Woman” as a classic superheroine, Austrian TV chief inspector Schnell or Claire Underwood, who may stand the chance of becoming the first female president of the USA in “House of Cards”. In “real life” we are commonly confronted with so-called “strong women” coming from political, journalistic, historical and economic spheres. In the media, “power women” often receive a preferred coverage—personalities like Angela Merkel, Theresa May or Christine Lagarde even make it to the front pages of renowned periodicals. In spite of this, women in general are still underrepresented in senior management positions.

At the conference, we would like to reflect upon such media phenomena and the discourses surrounding women in leadership roles. What are the social expectations that women (and men) have to fulfil in leadership positions (behaviors, traits, etc.)? What do we all experience in everyday economic and political life? What are the common-sense patterns of understanding provided by the media? What are the connections and interactions between the everyday life of the social actors and their media presentation? What are the real
challenges female leaders are facing in practice?

From a legal perspective, the structural conditions for women in management positions seem to be constantly improving (for example quota rules in supervisory boards). Topical management literature concedes that women may be superior in the area of emotional leadership. But how do such biologistic concepts hold up at a time, when even men show emotions? Will we eventually see the development of additional female leadership styles (in addition to male ones) in the near future or will we rather realize that leadership has no gender at all?

Our conference aims at shedding light on the interaction of media and female role models (especially in the field of leadership and management). We are interested in historical, current as well as future perspectives. As we are dealing with a complex matter, we particularly welcome interdisciplinary contributions.